Every four years the Assembly of Delegates of SIGNIS has to meet to elect or re-elect its President, Vice Presidents and Secretary General. This meeting is therefore a regular opportunity to bring together members of the Association from across the globe.

Organizing a Congress in conjunction with the Assembly is a chance to renew and reinvigorate the members of SIGNIS as they meet together face-to-face, explore common themes, share experiences and are challenged to respond to the changes in society and the media. 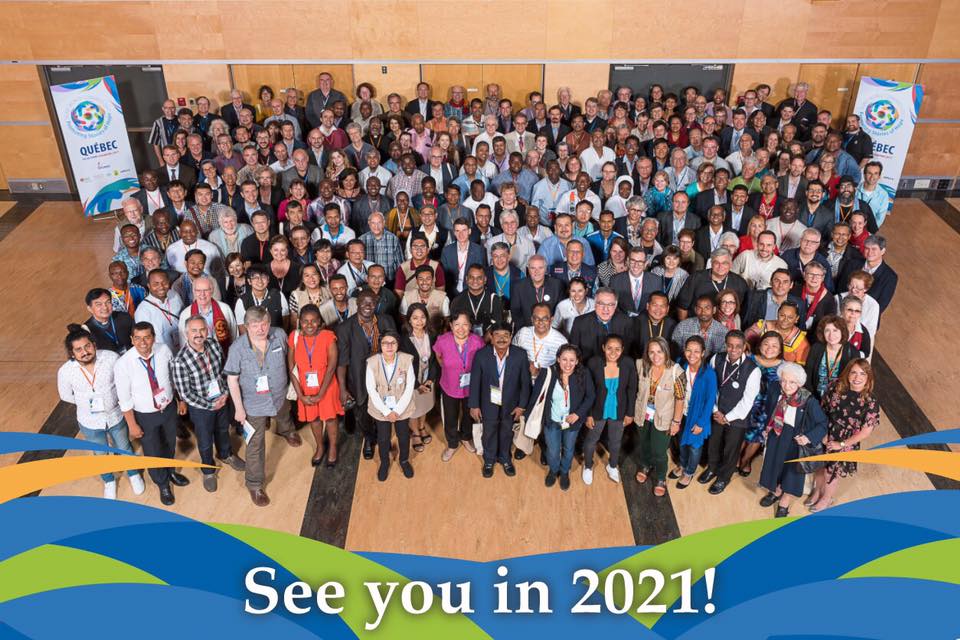 The SIGNIS Board of Directors has decided to accept the invitation from the Vice President of SIGNIS North America, Pierre Murray, to hold the next World Congress at Laval University in Québec City, Canada in June 2017.   To register, click here. Registration closed
See the Content

The SIGNIS World Congress 2014 took place from February 25 to March 1, 2014 in Rome, Italy on the theme "Media for a Culture of Peace: Creating Images with the New Generation". The theme "Media for a Culture of Peace: Creating Images with the New Generation", "underlines the continuing commitment of SIGNIS to work with children and young people to promote their rights in and through the media," according to SIGNIS President Augustine Loorthusamy. "As a Catholic association of media professionals we want to work with and encourage the new generation to create positive and powerful images that will express their hopes for a global culture of peace." At the previous SIGNIS World Congress held in 2009 in Chiang Mai, Thailand, which gathered more than 600 media and development professionals, Catholic communicators and young people from all over the world, the participants were challenged by young people: “We are the children of the world. Do you listen to our voices?” The 2014 Congress explored the responses to that challenge. To what extent are Catholic communicators listening to the voices of the young and working with them in creative and practical ways to transform the communications environment? Such a challenge opens up the need to explore the implications for human beings who find themselves attempting to make sense of an emerging culture – how can people, young and old, realize their creativity and imagination in ways that enhance their freedom and express their values? The concept of the ‘new generation’ also expresses the need to be able to respond imaginatively and appropriately to the emerging culture which cuts across traditional assumptions about age, sex, culture or political, economic and social status. The Congress tackled these issues through activities ranging from interactive dialogue, discussions, workshops, a strong youth element and the active participation of creative media professionals, following three major strands: A vision of the future: what is the shape of the emerging culture? Who are the creators of the images that are forming people’s imaginations? What are the implications for the Church and the wider world? Emerging Culture: A theological and ethical perspective on and critique of the values of this emerging culture. What values are being transmitted through the image world that is being created? How can these values be influenced? Challenges of the New generation: A creative and imaginative response to the new culture. Listening and engaging with those, especially the young, who are creating and producing the images of tomorrow.
See the Content

In 2009, the SIGNIS World Congress took place in Chiang Mai, Thailand, from October 17 -21, on the theme “Media for a Culture of Peace – Children’s Rights, Tomorrow’s Promise’. Children are the most vulnerable members of society; without respect for their dignity and rights we cannot build a culture of peace. The members of SIGNIS work with others, at international, inter-governmental and local levels; to secure a better future for our children — tomorrow’s promise. The Congress highlighted how the media can contribute to the building of a culture of peace, especially through the creative empowerment of tomorrow’s generation. The objectives of the Congress are to: Promote a culture of peace and the rights of the child; Inspire and give a new impetus to Catholic media professionals to make a culture of peace and children’s right priorities in their work; Celebrate the creativity and take stock of the rich achievements of Catholic communicators; Reflect on the issue, sharing ideas, experiences, insights and strategies among communicators from across the world; Update communicators with knowledge and skills; Offer solidarity and mutual support to communicators, some of whom are working in very difficult situations.
See the Content In 2005, the SIGNIS World Congress took place in Lyon, France from November 4 to 11 on the theme “Peace through Media”. Over 200 Catholic media professionals from more than 65 countries and five continents, met for this Congress. During a public conference on “Media for a Culture of Peace” held on November 5 and 6, they called for a fundamental change in the way we communicate through the media to contribute to a world of peace, respect and solidarity. The conference closed with a Mass for Peace celebrated by Mgr Roland Abou Jaoudé of Lebanon. From November 7 to 8, a series of workshops brought together Internet, radio, film and media education professionals, as well as Catholic TV producers and representatives. These workshops aimed to inspire the priority programmes of the association for the next 4 years. The Congress concluded on November 9 and 10 with the SIGNIS Assembly of Delegates. The Delegates elected Augy Loorthusamy of Malaysia as the new President of the organisation and Peter Thomas of Australia and Gustavo Andujar of Cuba as Vice-presidents. They also welcomed the new secretary general of SIGNIS, Marc Aellen of Switzerland, who had been appointed by the Board a few days before. He is succeeding Robert Molhant, who is retiring after 27 years at the service of the association. The SIGNIS Congress was also attended by representatives of the International Union for Catholic Press (UCIP), the World Association for Christian Communications (WACC), the International Lutheran Federation and Interfilm. Archbishop john Foley, President of the Pontifical Council for Social Communications blessed the gathering in the name of Pope Benedict XVI.
See the Content The World Congress organised by OCIC and Unda, in Rome, in November 2001, was a historical meeting. All those who participated were part of an important page in the history of media, and the presence of the Church in the field of communication. Created in 1928, the two organisations covered an extensive journey that little by little led to their merge. As early as 1982, the two Boards of Management met for the first time in Washington, in view of studying the relations between the two organisations. Three options were considered: a status quo, maintaining the two separate organisations; the creation of a federation, that would manage common activities, while maintaining OCIC and Unda; or merge leading to the creation of one single organisation. This last proposition had already been submitted to the vote of the two assemblies meeting in Quito, in 1987. It was at the time rejected. But the idea made its way into people’s minds. The convergence of the media made the merge a necessity. The principle of merger was voted nearly unanimously during a Congress in Montreal, in 1998. The undertaking of the merge took three years of intensive work which resulted in the November 2001 Congress in Rome, where the final decision of the creation of SIGNIS was finally taken. For more info, download this report.
See the Content