[The Statement is better read after seeing the film. It contains plot developments]

It is very significant that 2016 saw two films which explored Catholic themes in a profound way. There was Martin Scorsese’s Silence, the story of the Jesuits in Japan in the 17th century and the fidelity of the laity, even to martyrdom, as well as issues of challenges to faith. There was also Les Innocentes, directed by Anne Fontaine, the harrowing story of a convent of Polish sisters who were abused and raped by invading Russian soldiers during World War II and have to deal with the aftermath in terms of location and faith.

Les Innocentes is a French/Polish production, a French director and two inch actors but production and the rest of the cast will Polish. This is a stark picture of Poland and the Polish countryside in the post-war winter of 1945.

An interesting comparison is the 2014 Oscar-winner for Best Foreign Language film, Ida, a story about a Polish nun, a child during the war, her adoption and the discovery of her Jewish background and her later having to deal with this in terms of vocation.

Audiences who remember the 1959 film, The Nuns’ Story, will remember the similarities in the life of the nuns in the convent, contemplative, enclosed, austere, penitential, an emphasis on obedience, of the vows, the dominating role of the superior. This kind of religious life is only memory for older audiences, a surprise for younger audiences – although there are pockets of religious communities like this around the world today. The stone convent looks grim, the main action takes place in winter, the audience is taken into the chapel frequently for the chanting of the Office, to the corridors, the cells, the refectory. It is interesting to remember that in exactly 20 years, the sessions of the Second Vatican Council would be completed and changes in convent life were in the offing.

Of key importance for the audience is the impact of the rape story, the horror for innocent women, nuns, virgins, with the physical experience of the assault, with the psychological impact of the violation. The nuns are reticent about their condition, embarrassed, some mystified by their experience, a sense of shame, a sense of self-blame, the concealing of pregnancy beneath ample habits, moral issues with which the sisters have to cope.

Of significance is the perspective of the superior, wanting to keep the reputation of the convent respectable, concealing what had happened, stating that she was adopting out the babies, something which is not true. Rather she baptises the babies and leaves them by the wayside crosses. And, while she does mellow in some ways, it is discovered that she has been infected by the Russians with syphilis.

One of the sisters leaves the convent to find some medical help, from the French doctors and nurses present in the Polish village to tend to French wounded before they are repatriated. The focus is on a French nurse (and the film based on a memoir of these events before she died, prematurely, in 1946). She has a Communist background and so the convent tends to be alien territory. As portrayed by Lou de Laage, she is a fine woman, a volunteer, a woman of concern and compassion, engaging with the liaison Sister Maria (Agata Buzek) who speaks French and becomes more and more frank in her discussions with the nurse.

She learned a great deal of medical schools as well as compassion from the nurse and begins to confide in her, even more sympathetic with the sisters when she herself is attacked and threatened by a Russian convoy. She enlists the help of the Red Cross doctor who is Jewish, his family killed in Auschwitz and who interprets the reaction of the superior as anti-Semitic. Nevertheless, he assists with the births.

As the time comes to give birth, many of the sisters are fearful, ashamed, prudish and ignorant. Each of the sisters reacts in her own way, some avoiding the reality, others conscious of their becoming mothers. (In later decades, issues of the appropriateness of abortion in such circumstances were raised in moral and theological discussions. In the last 20 years there have also been quite a number of films about women who were raped in the Balkan wars of the 1990s, questions of abortion, issues of raising the children and the consequences for the children and their origins and legitimacy in Balkan society)

It is important to note that the nuns have to deal with situations themselves, that chaplain not being present, no explanation given but the audience presumes his arrest or his death. These are women’s issues and are dealt with by women assisted by the doctor.

It is the nurse herself who comes up with a solution which is positive for the sisters as mothers and for the local orphans who have been seen playing in and wandering the streets. 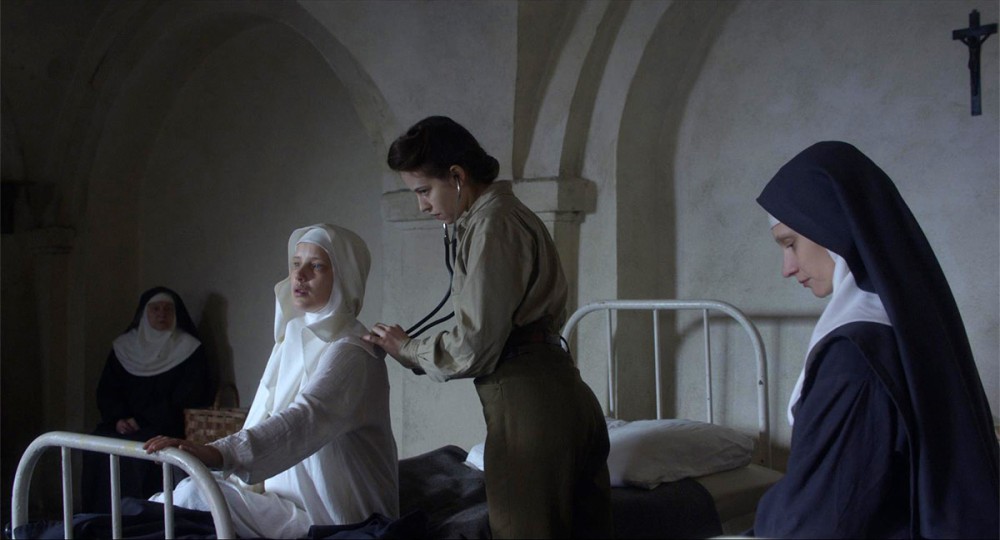 In fact, this is a film of faith but, ultimately of hope and charity, symbolised by a charming group photo of the sisters, the children, and the visitors who have been able to come, at last, for the profession of vows by the novices.

The experience of Les Innocentes (the innocents being the sisters as well as the babies) is, at times, emotionally harrowing, always morally challenging, probing the meaning of innocence suffering and the place and role of God, of faith.