26 April 2021 (Peter Malone) - For an American audience, this is an opportunity to look at the people of the United States, the part-time workers who wander the land in their vans, as well as a look in detail at the land itself. And, for non-American audiences, it is the same, but it is also quite an eye-opener as it treks through the American nomadland in the various seasons of the year.

It is surprising to find that the film has been directed by Chinese-born Chloe Zao. She has clearly absorbed the American experience, has written a screenplay, adapting it from a book by Jessica Bruder, has produced the film, directed it and, making it effective in its impact on the audience, edited the film. It is a tribute to her intelligence and empathy as well as to her cinematic skills and storytelling. 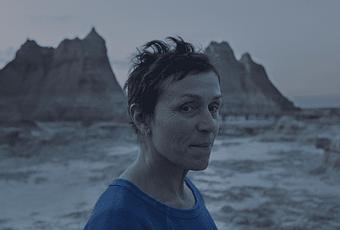 She is also aided immeasurably by the presence of Frances McDormand (who took on the project and acts as one of the producers). McDormand has a distinctive screen presence and has had it for more than 30 years – with two Oscars, Fargo and Three Billboards Outside Epping, Missouri, and many awards and nominations to her credit). As she has grown older, not concerned in the least about how she appears, she has embodied women who have had hard experiences and survived. And that is certainly the case with her character here, Fern, a widow who has seen her husband die of cancer, has lived in the town of Empire, Nevada, which in 2011 has had its gypsum factory fail, the town collapse and be deserted.

She has gone on the road, in her van, which she has made comfortable in its interiors so that she can spend her life there. She has a home, she says, though not a house. She joins a vast community of nomads who have a calendar where they can find part-time work at the various seasons of the year. We first see Fern at work in the huge packaging plant run by Amazon. Later she will work on the land, at an odd theme park with a huge dinosaur statue, in diners, cooking and washing up. But it is her choice, and she relishes this way of life, its being reinforced by a visit to her sister and family, to a short stay at the home of a friend whose family welcomes her. 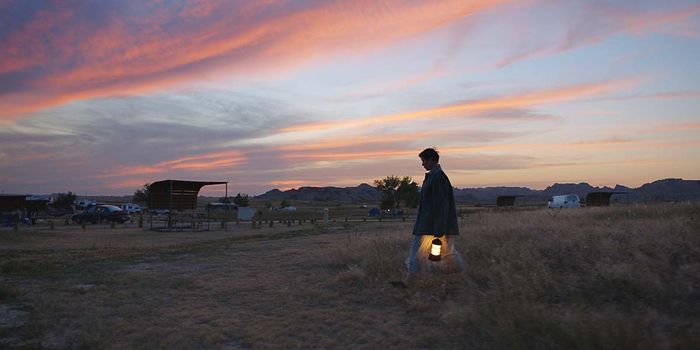 By and large, the locations are in the American Midwest and south-west, scenes of the barren Dakotas, the derelict town in Nevada, nomad communities in Arizona – with an excursion to some mountains and to the coast. It is a distinctive American tour.

We are with Fern all the way – and, the director focuses more than frequently on McDormand’s face, the range of expressions, the intensity, the peace, the actress almost giving a performance with her face alone.

But, most significant, there are the nomads themselves. In a way, the screenplay is a series of vignettes, the range of people that Fern encounters at work, on the road, at garage sales, bartering, especially with her love of rocks, and a special friend, David, played by David Strathairn. The audience will surely be impressed by Fern’s conversations with several of the nomads – in a sense they are showstoppers.

There is Linda May who works at the factory, getting older, chatty, making friends with Fern, making the sharing of the nomads so credible. There is Bob Wells who has started a community in Arizona where all the nomads can come, stay, share, tell their stories, be listened to and heard by Bob. There is young Derek who asks Fern for a cigarette, later encounters him on the road, tells Fern his story, wanting to communicate with his girlfriend and Fern reciting Shakespeare, ‘Can I compare thee to summer’s day…’ (Fern had been a part-time teacher).

But, most memorable, is Swankie, 75, diagnosed with terminal cancer, talking frankly and amiably with Fern, reminiscing about the travelling adventures of her past, of the vast cliff with swallow nests and the swarms of swallows, going on her way for more adventures until she dies, sending Fern a video of the cliff and the swallows. And Bob Wells leading a memorial celebration of Swankie as her friends all put a stone on a cairn in her honour. And the discovery that Linda May, Bob Wells, Derek, Swankie are all nomads themselves and that this is the only screen appearance.

At the time of writing, the Oscars have not been nominated. Surely Nomadland will be nominated in several categories – and, it would be an appropriate ending for 2020 and US turmoil for Nomadland to win Best Picture, an important and profound portrait.