1 April 2021(Peter W Sheehan) - This French-British co-production is an English-speaking drama about an elderly man’s struggle with memory loss, and his daughter’s efforts to care for him as his dementia worsens. It is based on a 2012 award-winning French play, Le Père, and has been nominated for multiple awards, many of which are still to be announced. It has already won an award to Director and Co-writer, Florian Zeller, made by the Boston Society of Film Critics, and an Award for Acting to Anthony Hopkins, made by the Toronto International Film Festival. Both are very much deserved.

In the film, Anthony Hopkins plays a proud, dignified Welshman, 80 years of age, called Anthony, who is fighting loss of memory, as dementia takes over. He is ‘The Father’of the title, and the film captures his anguish outstandingly. Hopkins’s performance is riveting, and he inhabits the role of Anthony. He guides the viewer deep into his character’s mind, and the viewer is made to experience what is happening almost at the time memory fades. Hopkins, as Anthony, attempts rationally to explain what is occurring, as the memory loss takes place. The effect is dramatic and thoroughly convincing, and Hopkin’s insightful and subtle performance shows no trace of artifice at all. The film highlights powerfully, the human tragedy of dementia, and also the effect this condition has on those who are there to offer support. One doesn’t exit the cinema after this film, without knowing what the tragedy of dementia, and the problems of caring are all about. 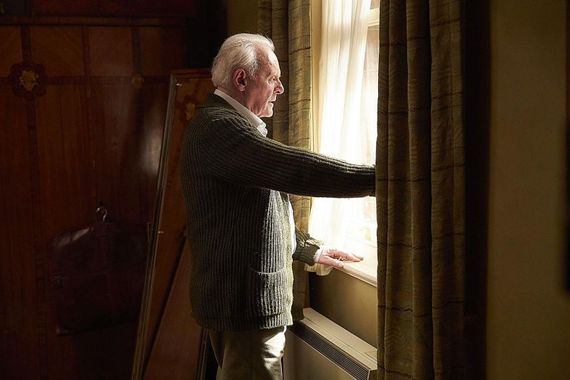 Olivia Colman is excellent as Anthony’s daughter, Anne, who moves into her father’s London flat to look after him. Anthony denies what is happening, but Anne sees the evidence of her father’s illness all around her. She is frustrated and exasperated by what is occurring, loving, but angry at her father’s denial. Her father refuses the assistance she offers, as he attempts to come to grips with his condition. Events are construed by Anthony distinctively. Unlike the behaviour of people around him, Anthony blurs entirely the distinction between self-delusion, hallucination and reality, and he responds in a way that serves to sharpen the interpersonal tensions that surround him.

Director Florian Zeller intentionally creates ambiguity to emphasise the distortions of reality that memory-corruption brings. The film’s editing, which is critical to the film’s force, demonstrates a moving around and mixing of events that capture the confusions that are occurring in Anthony’s mind – as evidenced by the questions he asks: Where is Anne? Is that her new partner (Rufus Sewell) or her husband (Mark Gatiss)?; and who is the woman (Olivia Williams), who says she is Anne, but who is carrying a chicken for my dinner?

Anthony and Anne love each other, but Anne’s feelings are affected by her father’s condition. The confusions that Zeller introduces, and which are superbly acted by Hopkins, pointedly accentuate the tragedy of what is occurring. The surrounds and location of scenes in the film are changed under Zeller’s direction to reflect Anthony’s growing uncertainty. By means of them, and Anthony’s attempts to cope, the viewer starts to question what is happening, and is made to wonder where reality truly lies – which in turn demonstrates the exact nature of Anthony’s experience. 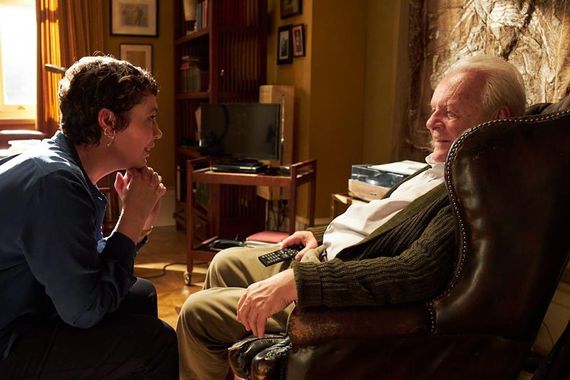 This is a film that is an obvious contender for Oscar glory. It is performance-driven by Hopkins and Colman, and under excellent direction by Florian Zeller. In editing, story-telling, acting and direction, the film is constructed intelligently, and Hopkin’s performance is unnervingly realistic. Hopkins acts dementia through the eyes and mind of a person who is losing all touch with reality.

The film is an impressive directorial debut for Zeller, and Anthony Hopkins’ acting is one of the best performances he has brought to the cinema screen. It is an engrossing film on memory corruption and the vulnerabilities of old age. Like Michael Haneke’s masterpiece, Amour (2012), the movie explores in detail the crippling effects of ageing in an original way. Without a doubt, anyone who goes to see this film will be profoundly moved by it.

Peter W Sheehan is Associate of the Jesuit Media