Québec city, June, 28th, 2017 (Peter Malone). June 21 was something of a Scorsese day for SIGNIS. In the morning there was a screening of his film, Silence, for SIGNIS Congress delegates, shared with delegates for the Catholic Press Association of America Conference. The film was briefly introduced by the co-screenwriter of the film, Jay Cocks.

For the afternoon session, Martin Scorsese was interviewed on stage by journalist and writer, Paul Elie, from Georgetown University. Some questions had been prepared by Rose Pacatte and Peter Malone but found that they had been more generally incorporated into the questions of the interviewer.

All delegates then attended the Congress celebration of the Eucharist at Québec Cathedral. Martin Scorsese attended the mass with the delegates.

At a Congress banquet at the Port of Québec, there was an award ceremony where Gustavo Andujar, the outgoing President of SIGNIS, presented a Excellence in Filmmaking Award to Mr Scorsese who responded with acknowledging each Association and its service as well as reminding his audience that spiritual films do not have to be explicitly religious.

In his answers to the interviewer on stage, Martin Scorsese spoke about his life, aspects of his career, his perspective on storytelling and spirituality, the making of Silence.

While there have been many articles and interviews about Martin Scorsese’s early life, he recounted events in the light of his coming to make Silence. He had a Sicilian background, growing up in New York City. It was at the age of seven that he began to attend school at St Patrick’s Old Cathedral, encountering the Sisters for the first time. The streets of New York were tough, mean streets, and the young Martin, hampered by severe asthma, was not caught up in the rough and tumble – and, his parents having taken him to see the movies, they became something of a refuge and the beginning of his great love.

In his recounting of his childhood days, unlike some other celebrities reminiscing about the church, there was no bitterness at all in his memories. Rather, he seemed at home around the church, hanging around as a boy, altar server, finding that the sisters and priests were pleasant to be around.

A significant part of Scorsese’s answer about his teenage years concerned the newly-ordained priest (this was 1953, the year Scorsese turned 11), Father Principe, who was such an influence, friendly with the kids, with a knowledge of the movies, serving as a model of priesthood. He was an influence in Scorsese’s decision to enter the junior seminary in New York City. But, after three months, he realised that wanting to be like someone was not a vocation. Fr Principe died only recently at the age of 89, serving as a friend for many decades. Scorsese seems comfortable with priests, especially with James Martin SJ offering a tribute to the recently deceased Jerry Martinson SJ who acted as advisor and liaison in Taiwan for Silence.

Fr Principe not only encouraged Scorsese in his filmgoing, his understanding of the different genres in the movies, but also encourage him to read more deeply, Scorsese pointing out to his audience the impact of James Joyce, later Dostoevsky but, especially, Graham Greene and The Power and the Glory but, especially the Catholic moral dilemmas facing the protagonist of The Heart of the Matter. 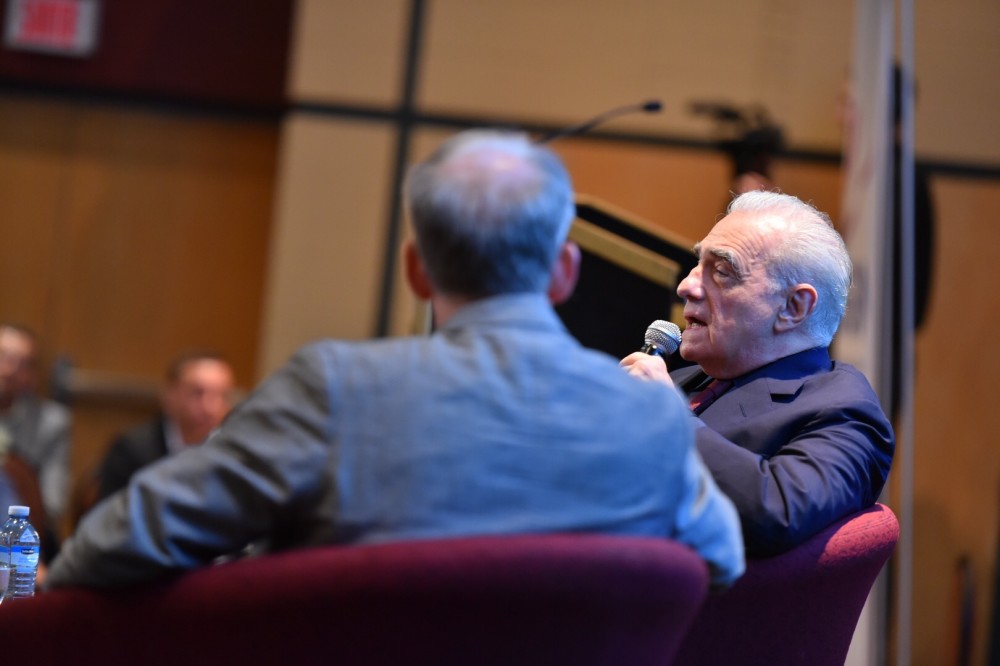 The interviewer touched on a point made in a prepared question (which had asked more specifically about the consciousness of martyrs in Scorsese’s childhood and teen years – and his pastime of sketching storyboards about Roman Empire martyr stories - as well as the awareness of Communist persecution of the church, like that of Cardinal Mindzenty in Hungary, and films based on him, Guilty of Treason and The Prisoner). This gave the opportunity for Scorsese to speak about the significance of martyrdom, noting strongly aspects of self-sacrifice, exploring it in Silence, but raising the more contemporary question of the missionary who believes in bringing truth to potential converts – but, as in the screenplay, the Japanese asking whether the missionaries took account of their truth.

On being asked about redemption, Scorsese said that he was a believer in “trying to get it right” which means “selflessness”.

The prepared questions had wanted to hear something more specific about Scorsese and actor, Andrew Garfield, going to the Jesuit retreat centre in Wales, St Bueno’s, and experiencing the Spiritual Exercises. Scorsese spoke of Garfield’s intense preparation for his role, his awareness of the spirituality, his sometimes recollected preparation for a scene with the director not wanting the clapper board to be hit so that his involvement was not distracted. There was an intense personal reality about his performance.

Which meant then that key issues of Silence were those of faith, with Scorsese saying that the movies provide images, but that the challenge for the spectator is to move beyond “dreamlike sequences” to go down into the soul. He also mentioned that the movies were like sanctuaries and cathedrals, important for a sense of depth but with life and activity happening outside. For Scorsese, this climax of faith, doubt, commitment, betrayal, is key to the challenge by the Japanese for the Jesuit to stand on the image of Jesus. Scorsese also noted that true humility cannot exist without humiliation.

Rose Pacatte had prepared a question based on Scorsese’s answer in a previous gathering on the link between The Last Temptation of Christ and Silence. Scorsese noted again that in the aftermath of controversy about Temptation, Episcopalian Archbishop Paul Moore gave him a copy of Silence, which he read on a train in Japan, and determined to make the film – which took so many years, adapting the novel to make it cinematic, and trying to find the funds.

As regards Last Temptation, he was assured by Paul Moore about the orthodoxy of his interpretation of Kaszantsakis’ novel, that Jesus was fully human, fully divine, and in the one person. In fact, he noted that when a wary producer asked him why he wanted to make this film, he found himself saying “I want to know more about Jesus”.

Which brings him back to Silence, the spirituality of his protagonists, the grounding in the Jesuit spiritual tradition, their ministry, the challenge to their faith, external failure, and the question of what true faith is in such circumstances.